Before most students moved back to campus, AU’s musical theatre students and professors had an entire week under their belts. What is typically a week of set-building, play or musical rehearsals and getting to know freshmen and newcomers, suddenly became a week of adaptation, socially-distanced concert rehearsal and discovery.

Many of the classes in the major will follow the hybrid format, utilizing both in-person classes when safe and online classes when appropriate. Students were acclimated to the online format last Spring when voice lessons, acting classes and dance classes were taken through Zoom and other platforms. New software and online programs will be implemented this semester after extensive research and discussion over the summer.

Creativity and adaptation play a significant role in the department’s planning and precautions for this semester. Director of the Musical Theatre Program David Coolidge spoke on how students and staff will be adapting.

“We learned a great deal from our experiences teaching online last semester,” Coolidge said. “After countless virtual meetings, Zoom webinars and months exploring new methods and technologies for teaching the performing arts in live, virtual and hybrid scenarios, we have a strong plan in place to be even more effective moving forward. As artists, we are constantly adapting to the world around us. It’s not enough to simply do what we’ve always done in a different format.  Instead, The School of Music, Theatre and Dance has worked tirelessly to reimagine our curriculum and performance events to offer the best educational experience in a variety of mediums. Our cross-campus partnerships with cinema and media arts have opened up new ways of telling stories and put Anderson University on the cutting-edge of arts education and ‘live’ performance events this year.”

Despite the difficult circumstances, the department is still planning to produce three performances, more than the typical two per semester. Director of Boze Lyric Theatre Dr. Fritz Robertson explained the challenge of redesigning the Musical Theatre experience.

“We have had to go completely outside of our own life experience and comfort zones to reimagine what a season could look like that would offer a significant learning experience to our students while maintaining the safest environment for all,” said Boze.

All performances will partner with the cinema and media arts program, providing opportunities for skill building and exposure in both departments. The cross-campus collaboration will allow for larger audiences and make performances more accessible worldwide.

The first is a concert of works by New York-based composer and lyricist team Zina Goldrich and Marcy Heisler. Their shows have been seen at Paper Mill Playhouse and Off-Broadway stages with Broadway’s top performers. Students will prepare the team’s pieces while receiving feedback from the women themselves. Instead of in-person live performances, the concert will be filmed and streamed live by the cinema and media arts program in Reardon Auditorium.

The second show, an adaptation of Edgar Lee Masters’s “Spoon River Anthology,” will include monologues, songs and dances in a progressive format shot on location and around the campus as a film. The film will release at the same time a small audience will attend the live outdoor performance.

The third show of the semester, “See Me—The Music of Lynn Lupold,” is written by Indy-native Lupold and will feature six women in a deconstructed cabaret format. This will be filmed in numerous parts of Reardon Auditorium and broadcasted over multiple evenings.

The performances themselves are prime examples of how the Musical Theatre Department is adapting to not only the changes caused by COVID-19, but the entertainment industry’s changes as well.

Along with the performances scheduled for this fall, COVID-19 is not preventing the department from providing other important opportunities. All musical theatre students will participate in masterclasses with Broadway professionals, some experiences which may not be possible in a busier season for theatre.

“With Broadway’s closure through the end of the year, we’ve been able to partner with

many professionals in New York and Los Angeles to work directly with our musical theatre students at AU this year,” said Coolidge.

Robertson and Coolidge both have significant goals and expectations for this semester. Robertson hopes to have more positive feelings rather than negative by the end of the semester and that “we will have all learned things that we would not have learned had this situation not been thrust upon us.”

“Each show we produce is an adventure, a unique journey with unforeseen challenges,” said Coolidge. “As a director, I have an idea of the overall vision and the themes I want to bring forward, but there is always an element of the unknown. When we start putting the piece up on its feet, then we are confronted by this challenge and that challenge, and collectively we have to find our way through the story. This process is very similar to what the whole world is living right now. We were all in the process of putting our own stories ‘up on its feet’ and suddenly we’ve been hit with some major challenges. Now what? If producing shows at AU has taught me anything it’s that rich lessons await if only, we’ll embark upon the journey with openness, dedication and a commitment to boldly facing the unknown together.” 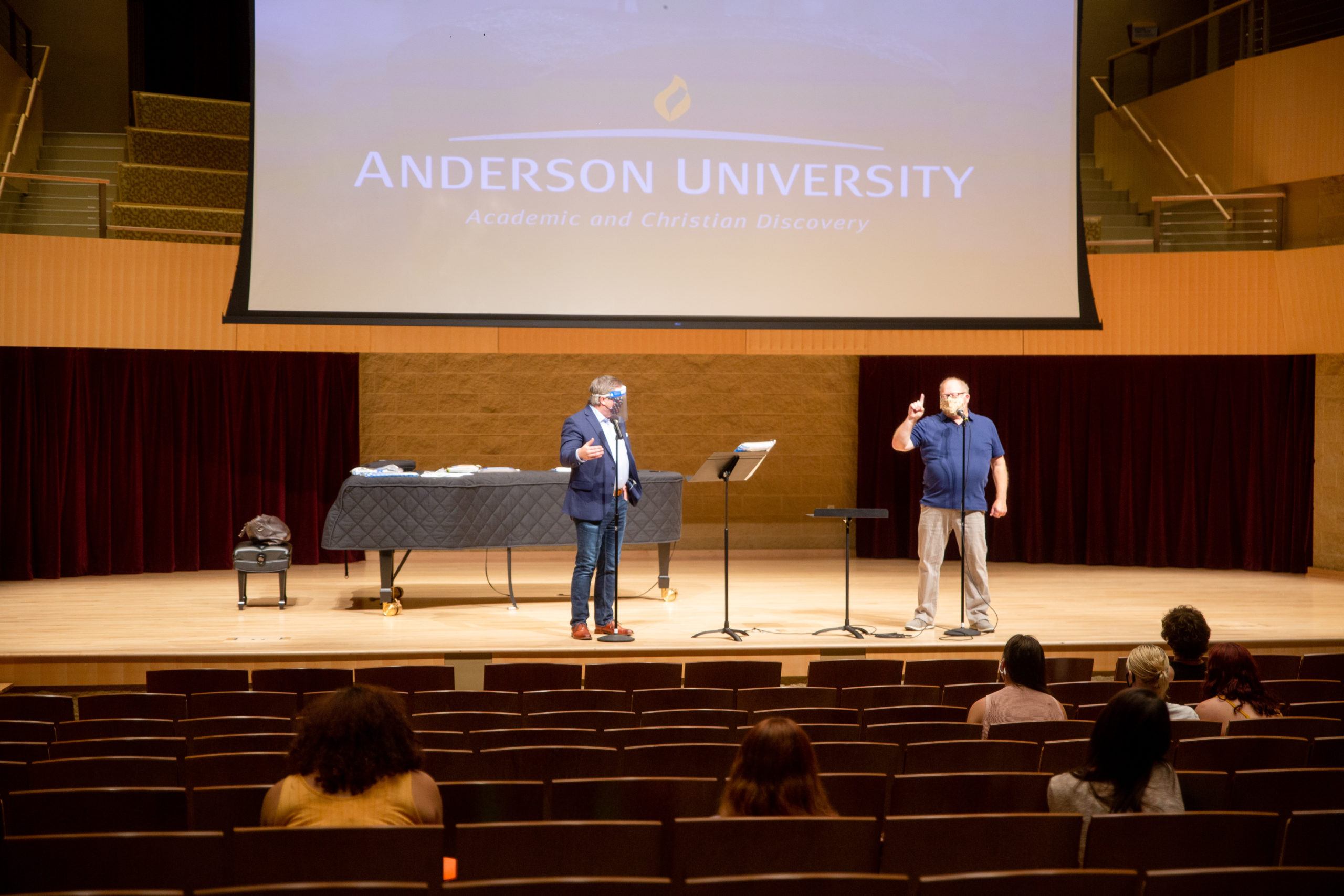 Professor Coolidge and Dr. Robertson face the challenge of adhering to new guidelines.

Miles Morey discusses the recent softball and baseball double-header splits, men’s and women’s tennis matches against Bethel and a historic game for the lacrosse team.

Matthew Burnstedt talks with Jonathan Williams about the path that led him to be AU’s first ever Esports coach. This audio interview was produced for the Spring 2021 Advanced Newswriting and Reporting course.

“Beginning June 1, AU will operate as a fully open campus with no required masking.”
Read more:

Gillian Lintz catches up with junior Gerald Potts about the unique circumstances that make music such an important part of his life.
Listen here: