You are here: Home / Archives for Arts & Culture 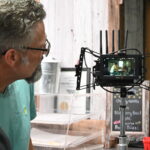 An aging rock star, after having left town following the death of his son, returns three years later to reconnect potentially with his estranged wife and others. That’s the idea behind a feature film, titled “Hellcat,” being produced and directed by Jack Lugar, professor of cinema and media arts at AU. Lugar started shooting the film this past summer. He found his cast close to home in many ways.  The cast and crew included his two sons, daughter, daughter-in-law and son-in-law. … END_OF_DOCUMENT_TOKEN_TO_BE_REPLACED

The Wilson Gallery is showing a Homecoming exhibition featuring photos from the 1960s pulled from the Anderson University archives. This exhibit was put together by student Jo Harmless with assistance from his professor, Holly Sims.  The intent of the exhibition was to express student life from the time period, showcase memorable spaces and show that people “are still people.” Very few of the people featured or the photographers are known. Both Sims and Harmless stated that their focus was … END_OF_DOCUMENT_TOKEN_TO_BE_REPLACED

In this audio story, Zac Tallent speaks with junior cinema and media arts major Sky Cramer about his passion for film and photography and making the most of his time at AU. … END_OF_DOCUMENT_TOKEN_TO_BE_REPLACED 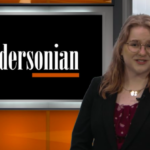 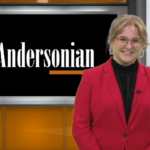 This Friday, Feb. 18, the Boze Lyric Theatre will bring the first musical production to Byrum Hall since the beginning of the pandemic.  “Seussical” combines a charming collection of characters from the works of Dr. Seuss like “Cat in the Hat” and “Horton the Elephant” in a colorful and exciting story. JoJo, one of the main characters, is played by freshman musical theatre student Trenton Donk. The 18-year-old has worked with director Kenny Shepard as well as voice and movement … END_OF_DOCUMENT_TOKEN_TO_BE_REPLACED

Candles and Carols is a 57-year tradition that the School of Music, Theatre and Dance (SMTD) puts on each December.  “It started when a group of people would gather in Park Place Church and sing carols together,” Dr. Jeffrey Wright, the dean of the SMTD said. “Gradually, we began to add components from the department.” According to Wright, it is an opportunity for the community to gather at the beginning of the holiday season and enjoy fellowship. “Through the show, we are reminded of … END_OF_DOCUMENT_TOKEN_TO_BE_REPLACED

Just 20 years ago in Smith Hall, student Ben McDonald interrupted student Dave Frey’s “Mario” game to begin a journey neither of them could have predicted. When McDonald asked Frey to join a band he was starting, Frey put down his controller and the two began writing songs. They started writing in the Valley or their dorm rooms and recorded in their rooms with microphones hanging from the ceiling. “God just kept opening doors, kicking them down for me,” Frey explained. “It kind of all … END_OF_DOCUMENT_TOKEN_TO_BE_REPLACED 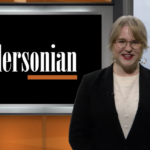