You are here: Home / Archives for Alle Roley 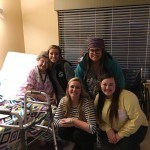 Formerly known as WQME, the new 98.7 The Song is a positive and uplifting radio station that broadcasts throughout central Indiana and is a student media organization at AU.AU senior Ariana Moffitt is a student manager at 98.7 and works with 98.7’s sales/marketing director to record, edit and produce commercials. She loves her job because “it is a relaxing and fun environment, and everyone has a positive attitude. That makes it a joy to work there every day.”Since its beginning, the radio … END_OF_DOCUMENT_TOKEN_TO_BE_REPLACED

As the end of the school year quickly approaches, many AU students are hyper-focused on graduation and their subsequent plans. Even those who aren’t graduating this year still feel the immense pressure to figure out where they will go and what they will do after leaving AU.The Student Alumni Association is presenting a series of lectures entitled “SWAGG (Skills We All Gotta Get) After AU” that will happen from 7:30 p.m. - 9:00 p.m. in Hartung 101 for the next three Thursdays. The purpose of … END_OF_DOCUMENT_TOKEN_TO_BE_REPLACED 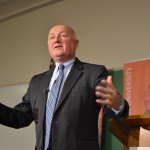 Last week, AU welcomed former Congressman Pete Hoekstra to campus. Hoekstra, a member of the Republican party from Michigan, served in the U.S. House of Representatives from 1993-2011. Hoekstra came to AU to speak with students, faculty and the community about foreign policy, the time he spent as a member of Congress, and his reflections on integrating faith into his life.Hoekstra got involved with the Intelligence Committee in 2001 and became Chairman three and a half years later. This … END_OF_DOCUMENT_TOKEN_TO_BE_REPLACED