You are here: Home / Archives for Top Stories 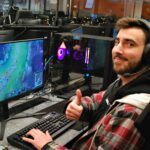 “Exciting and challenging” is how AU sophomore Jaden Ickes described the Anderson University Esports team’s successful League of Legends fall season.  Ickes, a seasoned veteran with nine years of experience in the popular and competitive gaming platform, played a critical role in the team’s 9-4 League of Legends intercollegiate record this season – the program’s first winning record in its three-year history. Though the team proved to be dominant in competition, sweeping six of their 13 … END_OF_DOCUMENT_TOKEN_TO_BE_REPLACED

Jon Gin, Head Women’s Basketball Coach, enters his second year at AU with a young team focused on speed. The team rostered 13 freshmen this year, four upperclassmen and a graduate student for a total of 18 players.  “We are young pups, for sure,” Gin said, “But you know, we're energetic because we are so young ... We're all about energy and flying around and trying to create chaos on defense. And hopefully, that leads to fast break points on offense.” Gin emphasizes to his freshmen … END_OF_DOCUMENT_TOKEN_TO_BE_REPLACED

The Wilson Gallery is showing a Homecoming exhibition featuring photos from the 1960s pulled from the Anderson University archives. This exhibit was put together by student Jo Harmless with assistance from his professor, Holly Sims.  The intent of the exhibition was to express student life from the time period, showcase memorable spaces and show that people “are still people.” Very few of the people featured or the photographers are known. Both Sims and Harmless stated that their focus was … END_OF_DOCUMENT_TOKEN_TO_BE_REPLACED

College Mentors for Kids, Alacritas and AU’s chapter of To Write Love on Her Arms (TWLOHA) are taking sock donations as a part of a nationwide donation movement called 'Socktober'. During October, students can drop off new or slightly used socks in any of the five boxes around campus.  There are boxes on the valley side of Hartung Hall, the valley side of the Marketplace, the bottom of Decker Hall, the lobby of York Performance Hall and outside the 24-hour lab in the Nicholson … END_OF_DOCUMENT_TOKEN_TO_BE_REPLACED

Coach Rock will no longer continue as head coach for the AU football team. Anderson University Football faces an immediate change in staff as Coach Steve Rock will no longer be the head coach of the program. With four games left in the team’s regular season, Jeremy Lochner will be serving as the interim head coach. This new position will be added to Lochner’s previous role as the football Defensive Coordinator.  Rock has been at AU for the past four seasons, the 2022 season beginning … END_OF_DOCUMENT_TOKEN_TO_BE_REPLACED

By Joseph Ringer Anderson University is celebrating its 105th year of operation at the 2022 Fall Homecoming. AU alumni will be returning to their alma mater for a variety of enjoyable events that graduates, current students, and families can partake in. Homecoming will take place Oct. 14-15, with events proceeding both on and off campus. Participants in the homecoming festivities can expect an abundance of home sporting events, well-known celebrations such as the homecoming street fair, … END_OF_DOCUMENT_TOKEN_TO_BE_REPLACED

On Monday, August 29th, Anderson University Athletics announced that the Men’s Basketball Head Coach, Owen Handy, had resigned and Assistant Coach, Carter Collins, would serve as the Interim Head Coach for the 2022-2023 season. Collins will be entering his sixth year at AU, coaching under Handy for the past five years. Collins said, “The most important thing that he [Handy] did while he was here was making strides in the program.” Collins sees this as an opportunity to continue making sure … END_OF_DOCUMENT_TOKEN_TO_BE_REPLACED

This Friday, Feb. 18, the Boze Lyric Theatre will bring the first musical production to Byrum Hall since the beginning of the pandemic.  “Seussical” combines a charming collection of characters from the works of Dr. Seuss like “Cat in the Hat” and “Horton the Elephant” in a colorful and exciting story. JoJo, one of the main characters, is played by freshman musical theatre student Trenton Donk. The 18-year-old has worked with director Kenny Shepard as well as voice and movement … END_OF_DOCUMENT_TOKEN_TO_BE_REPLACED

With the fresh perspective of Professor James Newton, the Anderson University sport marketing program is growing into a major and minor that many students are excited to be a part of. The sport marketing major and minor are relatively new to the Falls School of Business (FSB). Although this program is young, it has grown quickly and has made an impact within the FSB and AU. The program provides unique opportunities to students with class structure and real-world experiences. Newton … END_OF_DOCUMENT_TOKEN_TO_BE_REPLACED