You are here: Home / Archives for Keenan Noller

As a graduating senior, my best advice to my younger peers is simply this: get out. No, don’t drop out! Just get out. Let me explain. For all of the great things AU has to offer, it is nonetheless a small, Christian university in a place unknown to most people in the world and somewhat isolated from the 99.99% of humanity that has never heard the term “ring by spring” or been to a CAB event. Yes, AU’s small size and tight knit community certainly play a part in what makes it exceptional, but … END_OF_DOCUMENT_TOKEN_TO_BE_REPLACED 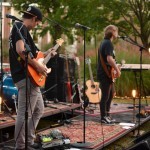 The Wldlfe, a new band featuring AU students Jansen Hogan, Jason Boucouras and Geoffrey Jones, has announced that their first EP, New, is set for release on March 3, 2016. Their release show has been planned for that night and will also feature the electro-pop duo Dream Chief. For those familiar with Jansen Hogan’s solo music, The Wldlfe will be a taste of something rather different. “Compared to what I did before, this is much more of a risk,” Hogan said, “It’s less safe, more fun, in my … END_OF_DOCUMENT_TOKEN_TO_BE_REPLACED 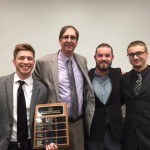 It is safe to assume that most students who take Business as a Profession are simply working for a decent grade, but sophomore visual communications major Peyton Bennett, sophomore business management major Blake Clatterbuck and junior business management major Jordan Ginder soared past Dr. Mike Wiese’s expectations with their startup: BCG Design Group. What began as just another group project for the class’s $25 business challenge has now taken off as a legitimate enterprise. The group has … END_OF_DOCUMENT_TOKEN_TO_BE_REPLACED