You are here: Home / Archives for Noel Marquis 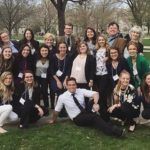 On April 21, psychology majors presented their research projects to fellow students and psychology professionals at the 37th Mid-America Undergraduate Psychology Research Conference (MAUPRC).  The aim of the MAUPRC is to allow psychology students the opportunity to present their research in a professional setting. This year, MAUPRC was held at Eastern Illinois University.  This year, research topics ranged from Sarah Repp’s “Negative Attitudes Surrounding Older Adults With Severe Mental … END_OF_DOCUMENT_TOKEN_TO_BE_REPLACED 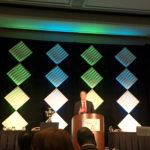 This year, AU had a special connection with the national Alpha Chi conference held in Portland, Oregon from April 5-7.  Five AU students traveled across the country to present their academic research at the conference and to hear a speech by President Pistole, this year’s Distinguished Alpha Chi Alumnus. Only those in the top 10 percent of their classes are invited to join the Alpha Chi Honor Society each year. About 300 Alpha Chi chapters exist in colleges across the U.S.  “It is a … END_OF_DOCUMENT_TOKEN_TO_BE_REPLACED

During their senior years, AU nursing students are not confined to studying in the library on campus; rather, they are encouraged to gain hands-on experience across the U.S. and even overseas. Nursing capstones take place during the second semester of senior year and incorporate three components. “Students are put through quite a grind,” said Professor Patricia Kline, who coordinates the clinical experiences. “They complete the highest level of complex patient care. They also complete a … END_OF_DOCUMENT_TOKEN_TO_BE_REPLACED

Crafting a flawless application can become a daunting task, especially when you’re not sure how to relate skills gained from your previous summer work experiences—which could range from an internship with a family business to delivering pizzas—to a potential career. Anna Rayis, graduate assistant at the AU Center for Career and Calling, shares her top resume-crafting tips that will help make your application shine. 1. Fix Your Format “Some industries are okay with color, and some are … END_OF_DOCUMENT_TOKEN_TO_BE_REPLACED

Due to a high number of incoming freshman, AU Housing has made the decision to designate Morrison and Martin Halls as freshman dorms. All second-year female students will be housed in Myers Hall beginning this fall. Assistant Dean of Students Jason Stephens says the decision to use Myers Hall for second-year females was made after receiving the anticipated number of new students from the Office of Admissions. “We are on track for next fall to have 550 new students,” says Stephens. … END_OF_DOCUMENT_TOKEN_TO_BE_REPLACED 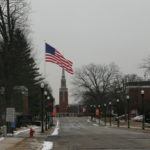 When Storage of America purchased the former Warner Press building on Fifth Street and installed a large American flag on the property, they likely did not anticipate the heated discussion it would prompt on the AU campus next door. When the flagpole was erected, one of the complaints some students and faculty voiced was its obstruction of Park Place Church of God, which serves as a scenic campus landmark. Others emphasized that the sound of the flag blowing on particularly windy days was … END_OF_DOCUMENT_TOKEN_TO_BE_REPLACED

While most AU students were trudging through below-freezing weather at the start of the semester, two mathematics majors were presenting their research project at the Joint Mathematics Meetings in sunny San Diego, California. Both Christina Coats and Ashley King were ecstatic when they discovered that they had been invited to present their research, titled “On the Creation of Rank Two Centrosymmetric Matrices,” at the largest mathematics conference in the world. “When I found out we were … END_OF_DOCUMENT_TOKEN_TO_BE_REPLACED

Tomorrow, Jan. 25, biology professor Dr. Kimberly Lyle-Ippolito will be delivering the first lecture in this year’s Science and Engineering Lecture Series. She will be speaking about CRISPR, a new and controversial technique in molecular biology that allows cells to be genetically modified. “It is being used to edit human embryos,” said Lyle-Ippolito. “They add this to a human embryo in a dish, and it will change the genetic makeup of the embryo. “They can actually correct genetic … END_OF_DOCUMENT_TOKEN_TO_BE_REPLACED

For the first time since 2013, the government of the United States has shut down. The shutdown, which occurred on Friday, Jan. 19 at midnight, was the result of the expiration of a spending bill. Republicans and Democrats have reached an impasse regarding the bill, which did not include protections for the children of illegal immigrants, dubbed “Dreamers,” which Democrats are advocating for. After the Senate failed to reach an agreement regarding the bill, the government shut down, leaving … END_OF_DOCUMENT_TOKEN_TO_BE_REPLACED

Michaela McCurdy is a sophomore biology major and Spanish complementary major. She serves as leader of AU’s Prayer Ministry and recently participated in the Tri-S trip to Israel over Christmas break.  Q: What are you involved in and most passionate about here on campus? A: I love campus ministries; I’m super passionate about people and living in community. I love running, being outdoors, hiking, going on any type of adventure and ice cream and mangos. Q: What is the role and impact of … END_OF_DOCUMENT_TOKEN_TO_BE_REPLACED